Our first anniversary only lasted about 4 hours, the time it took for our plane to fly from Toronto to the international date line. Our first day in Hong Kong was an exercise in keeping ourselves awake for 40 plus hours…..

We both had to work the day before our flight. We headed to the airport in the evening for our 1 am flight to Taipei (at this point we’d been awake 17 hours). The flight time between Toronto and Taipei is 15 hours and 50 minutes… neither of us is any good at sleeping on a plane, so we arrived in Taipei having been awake 22 hours. Then there was the layover and shorter 1 and a half hour flight to Hong Kong (awake 27.5 hours).. We arrived in Hong Kong around 10 am and decided that it would be best to stay awake until the evening to adjust our sleep schedules quickly (awake 39.5 hours).

Travelling to anywhere in Asia (from North America) is a test of your body’s ability to keep going. If Asia wasn’t so gosh-darn amazing, I’d have stopped putting my body through this long ago. As it is, we’re both addicted to travelling to this amazing continent, Asia.

Alright, so we landed in Hong Kong, and went searching for a place to buy airport-express tickets. The trip to and from the airport is cheaper if you buy your ticket return, so we planned on doing that. However, the nice man at the booth pointed out to us that since we were travelling in a group of two, we could just buy one return ticket and each use a portion, and then buy another ticket later to return to the airport.

The ride into Hong Kong took 25 minutes. The scenery was pretty incredible too, although it’s hard to recall after being awake for so long. The Train stopped at Hong Kong station, and we took a short metro ride to our hostel in Causeway Bay.

We were able to check in to our hostel, but the lady said we couldn’t get into the room until the afernoon. So we stashed our backpacks and went out to explore.

We decided to take the Metro to the base of Victoria Peak and take the tram up the hill. However, it was Chinese New Year, and every man woman and child was in line to take the tram up to Victoria Peak. We opted for a cab up the hill to the peak… and experienced our first scam of the trip. The cab driver assured us that the tram trip was expensive and that by taking a cab up the hill we were hardly spending any more money. He also said that the wait for the tram was at least 4 hours, which might have been true. We payed $400 Hong Kong Dollars to get to the top, we later found out that the tram is only 45 HK$…. 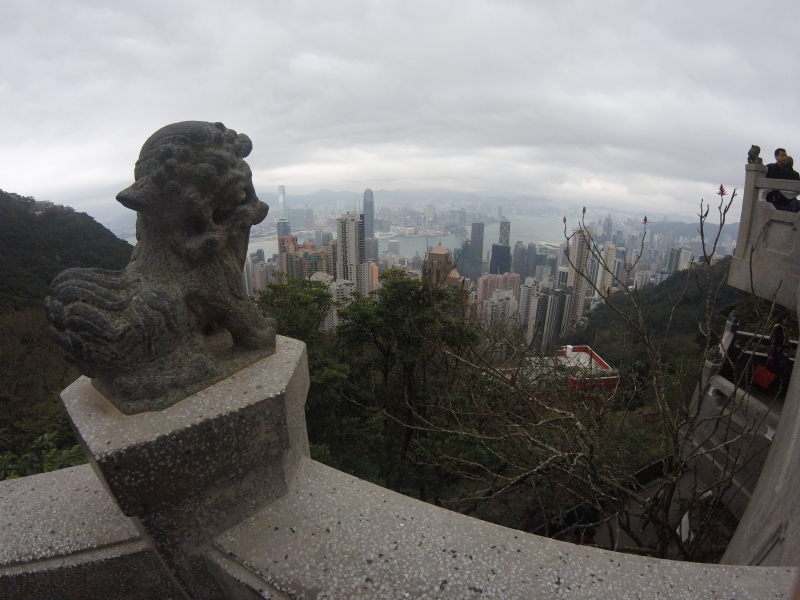 The view of Hong Kong from Victoria Peak.

The view from the peak was amazing, and we wandered around the trails for a little bit. It was cold and windy, so we decided to head indoors.

The shops and restaurants portion of the peak was so packed that we got lost and couldn’t find our way out of the building!!

After a long panic attack, we decided it was best to get back in line and descend the hill on the tram. 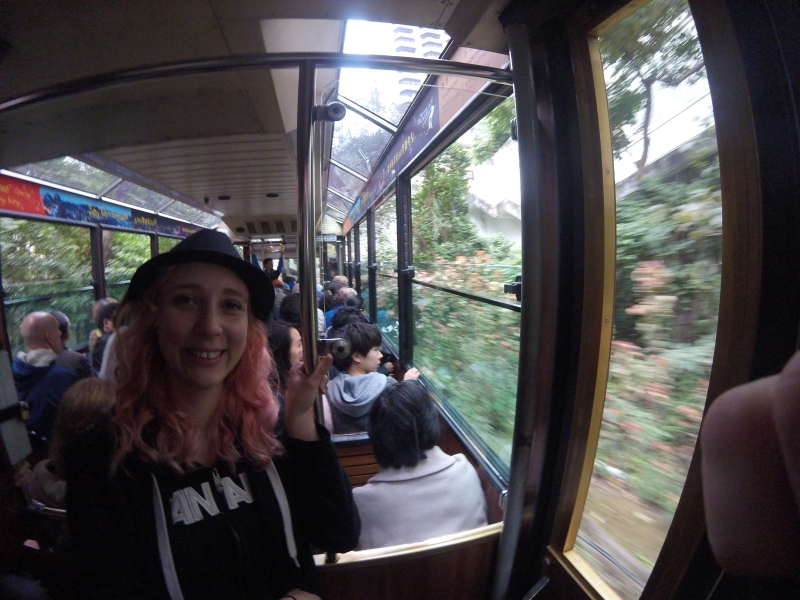 Riding the tram down the hill from Victoria Peak

OH.. one thing about lines in China…  I had banished from my mind the experience I had had in Shanghai at the World Expo, but waiting for the tram on Victoria Peak I was reminded what an aggravating experience lines in China can be. The lady behind us kept pushing us and trying to shove ahead of us. We spent our entire time in line on the defensive, fending off this lady and her family from trampling us to death. Once we got to the booth to buy our ticket the lady literally pushed me out of the way. Thankfully the attendant saw and refused to sell her a ticket until I had been helped.

The tram ride was really interesting. We had to stand for the ride, but really didn’t mind. The tram was at such a sharp incline that it seemed like your body was defying gravity. The ride down the hill was certainly the highlight of our time at Victoria Peak. Perhaps during a different time of year, not Chinese New Year, the experience would have been more enjoyable.

We wandering around Causeway Bay, and went to get our keys to the hostel room. Finding our room proved to be another stressful experience. Our hostel and our room were across the street from one another, but it was very poorly explained. We spent quite a lot of time on the street outside our hostel trying to find the door. In the end, we had the right door, but the pass code they had given us to get into the building had letters that did not appear on the number pad…. Long story short, we eventually got into our room, but only after Holly had had another panic meltdown.

We decided it was time for beer. Time to unwind. So we headed to Temple Night market for some food and beverages. We ordered some dishes and beers at a restaurant, while seated at our plastic stools. The meal was just what we needed!

We then decided to walk to the harbour front for the nightly light show over the Hong Kong side of the harbour.

On the way to the harbour we stumbled upon a “walk of fame” for animated characters. Naturally we had to stop to pose for some pictures.

“walk of fame” for animated characters 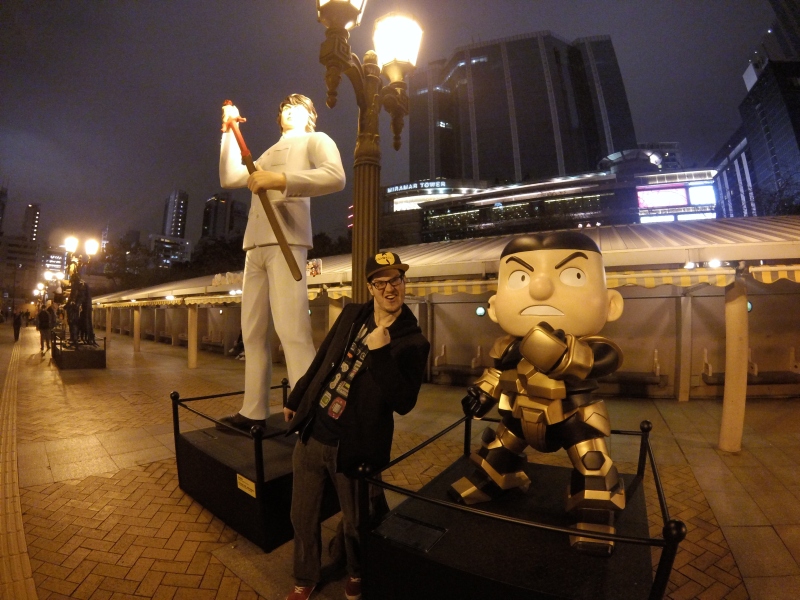 The light show was alright, but the Hong Kong skyline looks incredible all the time, so the addition of a few extra lights didn’t seem necessary. Regardless, we enjoyed watching the boats go by in the harbour and loved watching the city light up around us.

We then took the Star Ferry back to the Hong Kong side of the harbour and decided it was finally time to call it a day. A loooong looooong day.

Riding the ridiculously cheap star ferry back to our hostel. Definitely a must do in Hong Kong.